IPVANISH VPN bills itself as the “USA’s Best VPN,” and the company certainly has a few credentials to back up its claims. For starters, they’ve been in business long enough to have carved out a decent reputation.  The fact that they have more than 700 servers in 60 countries around the world doesn’t hurt either. That’s a respectable amount of coverage for a VPN provider and virtually guarantees that you won’t find it hard to unblock restricted content. As with all major VPN providers, however, the devil is in the details. 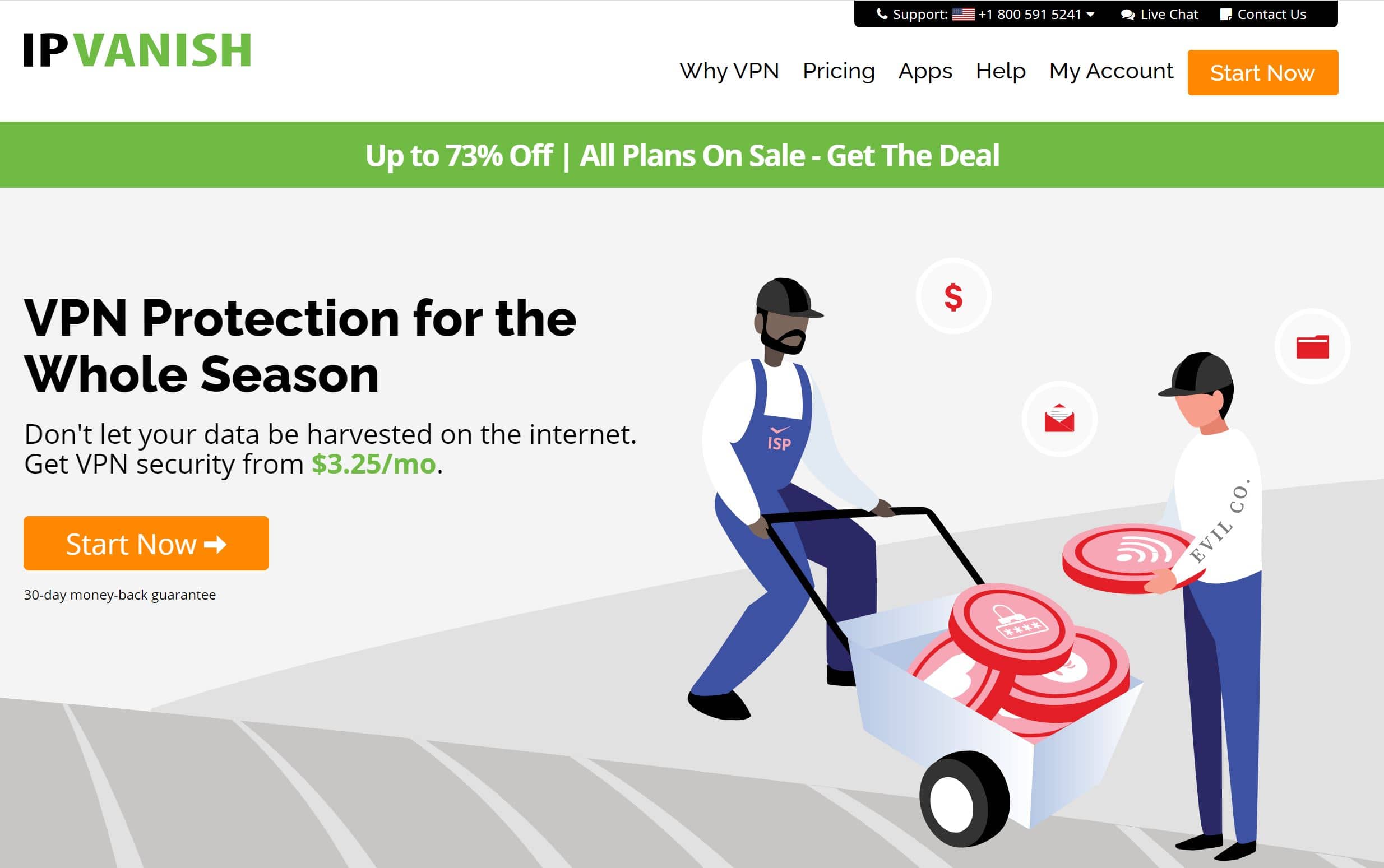 IPVANISH is based in the United States and has almost 20 years of network experience, much of  it in the VPN arena. There is hardly any criticism that can be leveled at the brand’s overall experience. Being based in the United States is something that will appeal to some VPN users, although there are plenty of overseas providers that are reputable. PC Mag and other publications have given IPVANISH decent ratings which further enhances their credibility.

It is fair to say that IPVANISH stresses the overall quality of their service over price. They don’t make any apologies for their pricing which, to be honest, has become somewhat more reasonable. The company believes that the numerous features it offers such as P2P support and more than 40,000 shared IPs is enough to merit whatever they decide to charge. There is certainly truth in the assertion that a paid VPN is better than a so-called “free” VPN account. We’re just not sure that some companies need to charge as much as they do.

IPVANISH allows users to have up to five simultaneous connections and supports OpenVPN, PPTP and L2TP/IPsec. The encryption is 256-bit AES, a respectable industry standard. The company is one of a handful of VPN providers that still permits anonymous torrenting and unlimited P2P traffic. There are no logs kept of any kind, and users can switch between servers as often as they like. Of course, this VPN still serves the purpose of placing a nice security barricade around your connection, and users can have confidence in their ability to surf the Internet with a strong measure of anonymity.

In evaluations involving the customer service provided by IPVANISH, the company doesn’t do too bad. Issues tend to be resolved quickly with a minimum of fuss. The customer service associates are friendly enough and, more importantly, they have an adequate amount of technical knowledge and can walk users through connection problems and other tech support concerns that arise.

Let’s be honest. Almost every VPN provider claims to be the fastest. IPVANISH is no different. While we’re not going to try and resolve that argument between the various VPN providers, IPVANISH does seem to be faster than most. This is an especially important consideration for individuals who like to stream a lot of media. Using a VPN to unblock Netflix in a certain locale is great, but if the speed of the VPN is such that streaming a movie becomes impossible then what is the point?

It is common for all VPNs to present a slight reduction in overall speed as traffic is routed through the VPN tunnel. The best ones, like the one offered by VPNaccounts.com, make this negligible to the point that it is hard to notice a difference between your unsecured connection and the VPN connection. IPVANISH came through speed tests with a barely noticeable drop in speed, but this varies from server to server.

While there are many server locations from IPVANISH that simply do not provide an adequate download speed for streaming media, the majority of them will work just fine for that purpose. It also helps that the VPN interface available from this company does an adequate job of letting users know which servers are fastest. You can even sort the servers by fastest ping time. It would be nicer if speeds were more uniform across the board, but this is a problem to some extent with many VPN providers. With IPVANISH, however, the difference can be stark.

Not so long ago, IPVANISH was one of the pricier VPN providers in the industry. That has changed some, probably in response to poor reviews on the subject. It could also be that the increase of people who use a VPN has helped to lower the price.

As with many VPN providers, IPVANISH offers three payment choices. The first of these is month-to-month service at a cost of $10. The second option is a three-month subscription at $26.99. The third option is to buy yearly service at $77.99. All subscriptions are recurring and may be purchased with a major credit card, PayPal, numerous e-wallet providers, and even Bitcoin. More and more VPN providers are adding Bitcoin to their assortment of payment options for an even greater level of anonymity.

Obviously, the best option is to choose the yearly package which comes out to $6.49 per month. If you do it that way, IPVANISH actually becomes one of the more affordable VPN solutions. The only problem with that is that some people don’t want to be locked into a yearly commitment. It seems like since there is such a big disparity between the yearly and monthly price that the company could easily offer monthly service for $8.99 which would make them more competitive on a short-term basis.

The basic features offered by the company are impressive. To begin, they provide more than 700 server locations at last count. These servers are located in some 60 countries. All users are allowed unlimited bandwidth and unlimited P2P traffic. They company claims that they keep no logs of any kind, so it would be impossible for them to turn over browsing data on any of their customers.

IPVANISH allows unlimited server switching and will allow users to connect five devices simultaneously. It is even possible with the company’s software to protect devices like an Xbox One or PS4. This gets a little complicated, however, and users will probably require assistance from the company when it comes to configuration.

Those who like torrents will appreciate that IPVANISH permits unlimited torrenting with their VPN. Of course, using torrents even with a VPN can be dicey. For one thing, torrent sites have a bad reputation for delivering harmful viruses and other malware to your computer. What users would do well to understand is that a VPN is not an antivirus. While it affords you anonymity, it does not scan something you download for a harmful application.

The security of this VPN is accomplished through a selection of protocols which include OpenVPN, PPTP and L2TP/IPsec. The encryption is 256-bit AES. There really isn’t anything flashy about this setup. It is pretty standard in the industry for VPN providers to offer the same. This VPN works on the same principle as all others, replacing your IP address with one belonging to IPVANISH. Your IP address is similar to the 911 address for your residence. It can be used to pinpoint your general location and even a specific machine. One of the main reasons for using a VPN is to make your IP address vanish, and this one certainly does that.

One claim that is made by IPVANISH seems a little sketchy to us. They state that using a VPN can help to prevent your ISP from spying on your browsing habits and also from throttling your speed based on data usage. The first part of that is true for all VPNs. The second one, not so much. You are still using your ISP for Internet access. They simply can’t see what you are doing. But they can surely still monitor how much data you are using.

To use a VPN from IPVANISH requires nothing more than using the existing VPN client on your computer. You don’t have to download any additional software if you choose not to. All Internet-ready devices today, from computers to gaming platforms, have built in VPN software. Once you have set up your subscription with IPVANISH you will be given configuration instructions, and the company even has customer service associates to help you if you hit a snag.

There is another option, though, and that one is downloading the IPVANISH interface. To be honest, this interface is elegant and works very well. It gives you substantially more information than the client already installed on your device, which includes the upload, download, and ping speed of all the servers. It is helpful that the company has built in a way to sort servers according to various parameters such as speed. This way, you can tell at a glance which servers will work best for streaming media or simple browsing.

There are a number of choices when it comes to the security protocols offered by PIA VPN. The standard protocols of PPTP, L2TP/IPsec, and OpenVPN are available. In most cases, the OpenVPN protocol is going to be the best choice for most users.

Thing get even better when it comes to encryption. Private Internet Access VPN will protect you with AES-256 encryption, but that is just the beginning. You can also further authenticate with SHA256 and handshake with RSA 4096. It should be noted that using the handshake will administer a significant reduction in speed. All this probably sounds somewhat overwhelming to most VPN users, though, who find the standard encryption offered by the VPN tunnel to be enough.

This provider takes the same approach that many VPN companies do in regards to logging traffic. They do not log or retain logs of your browsing activity. The reason this is important is because any provider could be compelled to turn over logs at any time by a government agency. If those agencies came knocking with a court order, there would be little that could prevent them from obtaining logs if there were any to obtain. The best way to safeguard the security of individuals is to maintain no logs. You cannot turn over anything that you do not have.

The benefits of using PureVPN are appealing and include:

There aren’t many drawbacks but these negatives should be considered:

If you got this far, you must be really considering IPVanish VPN. Internet Freedom, Privacy & security just a few clicks away. More VPN Providers Reviews here.