If you were to ask a significant number of random people why they use a VPN from VPN-accounts.com, a good number of them would tell you they want to play poker or access dating sites. It may not be the number one reason people purchase VPN service but it is very near the top of the list. Online poker and dating websites are restricted in many places, and a VPN can often restore access to these services.

The popularity of online poker and dating

To give you an idea just how popular online poker and dating websites are, let’s take a look at a few numbers.

According to a recent survey by Reuters published in January of 2014, approximately 52% of the US male population and 47% of the US female population use online dating websites. Dating site users spend an average of $239 per year on these websites, and the total revenue earned by dating websites is a staggering $1.25 billion dollars. Sites like eHarmony and Match.com boast a combined 37 million members. As you can see, online dating sites are a big business in the US. The numbers are similar in the UK and other areas which do not restrict online dating sites.

It is hard to get a fix on an actual number of online poker sites because new sites appear almost daily. What we do know is that online poker is a multi-billion dollar industry across the world. The one significant difference between online poker and online dating sites is that most poker sites are restricted in the US. There has been a slow, grassroots effort to legalize online poker in the US. So far, only a handful of states have made poker sites legal stateside.

The important thing to take away from this discussion is that online poker and online dating are extremely popular. Their popularity actually poses a bit of a problem for some users.

The expat dilemma with dating websites 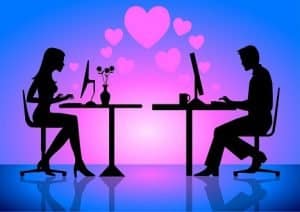 For expats who find themselves working and living abroad for months or years at a time, being able to access their favorite dating website can become a problem. The Arab Region, including the UAE, Qatar, Saudi Arabia (KSA), Oman, and Bahrain, frown on dating websites as a violation of Muslim morals and customs. China also employs selective restriction of dating sites. If expats finds themselves working in one of these areas, they will not be able to access a dating website account via the state-controlled ISP’s. By extension, the locals also cannot access these sites. Using a VPN for dating website access is the only reasonable solution.

You’re probably asking this question: if a dating website is blocked in a certain locale, what good does it do to unblock it with a VPN? After all, your chances of meeting someone for a date would seem to be rather slim in a society that frowns on these websites. The answer is pretty simple. The number of online daters who actually meet in person is very small compared to the number of people who use the sites. Most users are engaged in cyber dating. They use dating sites to create online relationships. When you understand this you can see that people who live in areas where dating websites are blocked also have a desire to use the sites.

The online poker dilemma in the US and abroad

Because online poker is now mostly restricted in the US, a large number of poker players have turned to a VPN for the purposes of playing the games they love. And some of these users are what you would term poker professionals. They earn their living playing poker online.

But, let’s think again for a moment about the traveler or expat who hails from a country where online poker is legal, like Germany or the UK. Whenever they cross the borders of their home country and venture into areas where the game is restricted, a variety of methods including geo-restriction are employed to prevent them from playing poker.

The VPN solution for online dating and online poker

In a sense, the uses for a VPN are significantly broad when it comes to dating and poker websites. When you add in the factor that VPN’s also offer an added level of security, using them to unblock these sites is a wise choice.