‘Contact Not Content’ Communication corporations are now required to record all Internet contacts between people in the United Kingdom. The high tech Internet infrastructure is now being used as part of a police surveillance method. The UK’s national security modernization effort has deemed it a necessary move to keep tabs on Internet users within the UK.

There were plans for a database, but those plans were decided against. Instead, the home secretary wants user details only, neatly organized and held for security purposes.

The database system would have tracked everything from E-mails and phone calls to Internet usage and social networking. The Home Office buckled under intense conservative pressure opposing the implementation of the database.

A new strategy was developed that did not result in opposition from either side of the political voice. “Doing nothing” in the face of a communications revolution is simply too valuable of a resource to pass up, officials said. All communication companies, from Internet Service Providers to cellular networks will be required to acquire additional personal details from subscribers. The communication companies are then required to organize these additional user details so they are compatible with new police software. Police, MI5, and other crime investigators will be able to use these new user detail profiles to investigate crime and terrorism. Costing upwards of £2bn to set up, this is no small project.

Any time there is a new technology, you can be sure criminals will find a way to use it to their advantage. The power of police forces have to be one step ahead. There is not a means of communication that is not overseen by authority figures. The advent of the Internet and super high tech communications have always been on the outskirts of surveillance. This new means of contact surveillance gives police a long sought after foothold in the fight against cyber crimes. If they have the upper hand against tech savvy criminals, the crimes they commit will stand less of a chance of going unpunished.

Sure, it may seem like an invasion of privacy to have many of your personal details at an authority figures fingertips, but rest assured this is move to secure Internet contacts, and not the conversations within such relationships. Being able to track the contacts of law breakers and convicted criminals will allow a swifter hand of justice when it comes time to make a real life captures and incarcerations. Using a VPN connection, you would be concealing your real IP address and everything you do will be anonymous and encrypted via our servers located around the world.

Is it Safe to Torrent With VPN? 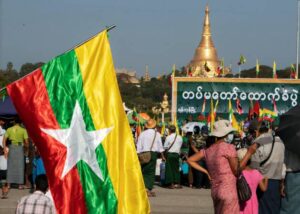 Myanmar to Block VPN and Cryptocurrency